Frozen Semen
available to pre approved bitches.
Tang does not carry the fading gene I had wish for my silver line,
​nor does he thankfully carry the brown gene! 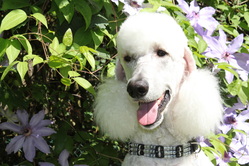 Posing by our beautiful Clematis :)
It does my heart good to say Tang is in the best home I could ever imagine!!

They have given him the boundaries all dogs so seek and require and he in turn has given them all his respect for a beautiful balanced Standard Poodle!!!! 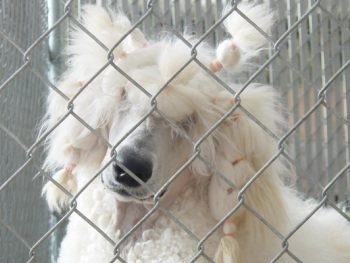 My sweet loving Tang in his tang/creamsicle coloured bands!!!

Thank you to Judge Luane Williams for Tang`s Group One
(Gold Medallion) and to Judge Richard Camacho for his Group Three (Bronze Medallion) This gave me the same tingling and thrill I had when I showed Opal, Tang`s littermate and placed over a BIS bitch and a
BISS American Champion male.
I was very pleased for Erica................!!! 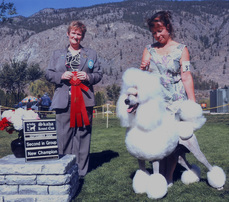 Tang took Winners Male for 2 points,
Best of Winners, then Best of Breed
from the Open Male Class over an American Canadian Champion that was being campaigned as a Special. We then went onto the Non-Sporting Group where we made the group cut and then we were awarded a wonderful Group 2nd!!!!
This most prestigious win was over Canada`s Top All Breed Dog!!!
Thank you for this gracious and marvelous win from
New Zealand Judge Mrs.Dianne J. Tyssen.
This was a 5 point win to total 10 points towards his
Canadian Championship Title.
I hope Erica could sense this wonderful win in her Spiritial World!