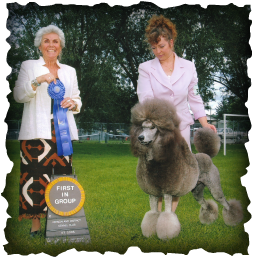 What an honour to go around the
Best in Show ring with a dog I had bred let alone a silver one.
Thank you to
​ Judge Jacqueline Quiros-Kubat
for finding the qualities my boy has!

♥  ​
An excerpt from Dogs In Review

DOGS IN REVIEW VOLUME 9, ISSUE 3 MAY 2005
OH CANADA!  From the West by Dawne Deeley
Coming up for BIS - BBE was the barely-year-old Standard Poodle dog, Violet Sky Above, who is lovingly presented by Deborah Foster.  Foster is one of those rare individuals who believes the amount of reward one can expect from a project can be gauged precisely by the amount of work put in.  A relative newcomer to the sport of conformation exhibiting, Foster has already become a fixture on the West Coast scene, with several stout wins to her credit.
* * * * * * *
Thank you Dawne Deeley of Tsar Shadow Carelian Bear Dogs!!!
​ 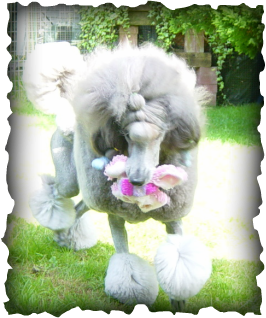 Santos has a sweet loving
disposition with a natural drive for retrieving.
I can ask him "What have you got?" Being my biddable boy, he`ll bring whatever it is to me.

AKA "Santa Toes"  named by my girlfriends 6 year old daughter as she paused with arms crossed holding her hand up to her face trying to remember his name and piped up Santa Toes!!!
It has stuck with all his friends!!!
♥
​

We continued on again to take
Non Sporting Best Bred By Exhibitor Group 1st!
That Pot of Gold brought us another $75! I love this show! 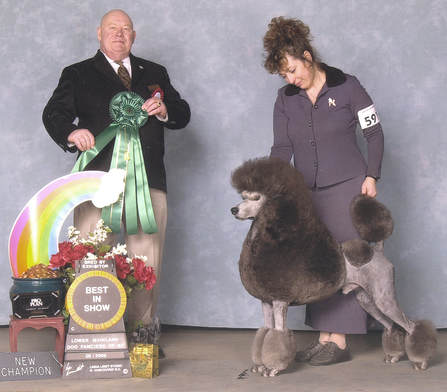 ​We took Reserve Winners Male today under Judge Tom Touzel along with a
Non Sporting Best Bred By Exhibitor Group 1st!
​Being the Pot of Gold Show we won $75 for the Group 1st win woot woot!

​We repeated our wins for
Winners Male, Best of Winners & Best in Breed ​
for another 2 points today under Judge Cecil Ringstrom which now places us onto 7 points towards our Canadian Championship shown exclusively from the Bred By Exhibitor Class.
♥ ​​​ 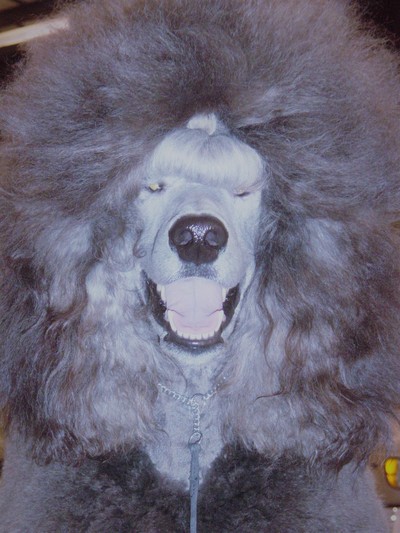 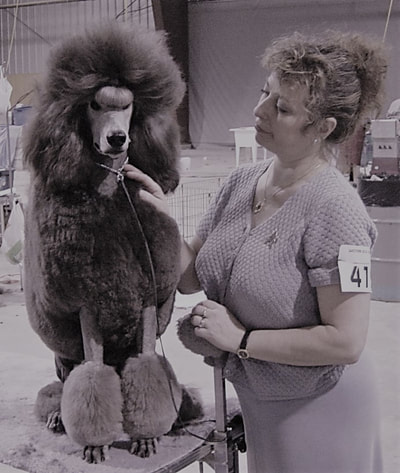 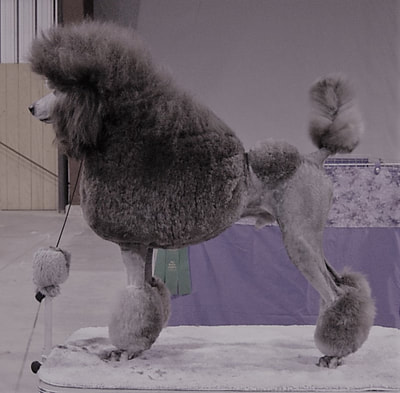 Santos went Winners Male, Best of Winners & Best in Breed
for 2 points today under Judge Butch MacDonald for a total of 5 points.
We continued on to take the
Non Sporting Best Bred By Exhibitor Group 1st!
♥ ​ 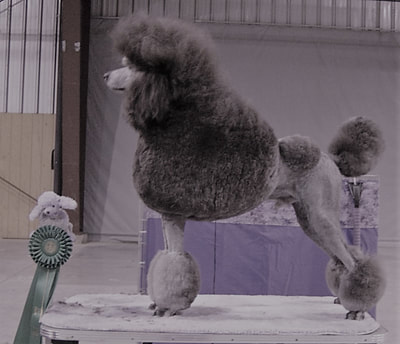 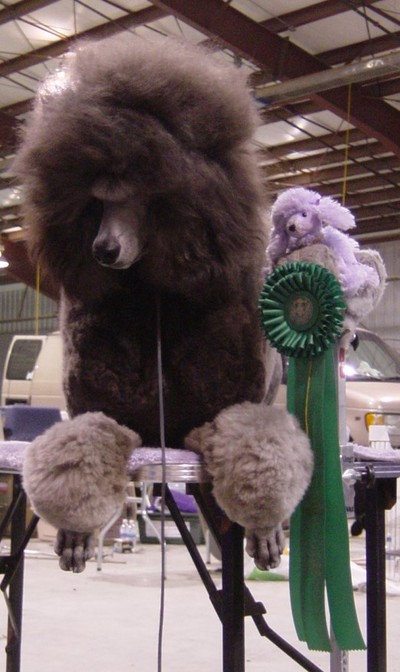 Winners Male, Best of Winners, Best of Breed
for 1 point under Judge Mrs.J Kay for a total of 3 points towards his
Canadian Championship.
♥  ♥  ♥ ​​
Shown once as a Junior Puppy for his Puppy Debut in Kamloops
September 2004 with siblings Viola and Keeosa, Santos came back out
Sunday December 19, 2004 at
Heritage Park, Chilliwack, B.C.
as a Senior Puppy taking
Winners Male, Best Opposite Sex and Best Puppy in Breed
for 2 points under Judge Mr.Edd Bivin.

With the addition of a Poodle Booster we came home
with three lovely wine flutes complete with poodle wine charms!

Santos was later to come out to the show ring as I had his
brother Keoosa and his friend Sur of Tudorose Poodles to finish
their Canadian Champions Titles first.
A girl can only do so much!
♥  ♥  ♥ ​​