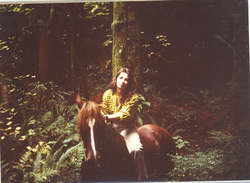 Photo on left is at
Burnaby Horsemens Association
on the east side of Burnaby Lake.  I was showing Strands Sensation (pictured on left) in Showmanship which we took first over thirteen other horses plus a National Champion!  That was my second or third attempt at Showmanship so I was very pleased!!!

Pictured on right I am in Golden Ears Park, Maple Ridge, B.C. where I often rented horses for a days ride.

Cheekona my smiling Doberman of the 80's 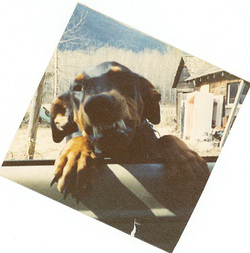 Oh how I missed her when I had to make that gut wrenching decision that put me into a state I was given a few days off work.
My best friend of ten years!!

She was beside me whether I was on horseback or foot or swimming out to the middle of a lake with me!
Cheekona was also a great horse herder when a stud colt broke out of a pasture.  She herded him right back to where he belonged!

She would accompany the elderly gentleman cross country skiing that lived next door to me when I lived in the Western Kootenays of British Columbia.

Cheekona took watching over my daughter and her cousins very seriously
not allowing any strange dogs around whenever we were out and about and
at the lake!  She got nicknamed "Grandma".

Upon one of my fathers clients departure Cheekona just so happened
to give him a little reminder as he walked past all the little toddlers in the pool on the back patio as he was exiting the yard.  He walked from the back yard straight around to the front door to share with us what he had just experienced.  He had received a teeny weeny little pinch in the buttocks to be reminded that those were her children and that she was there!  After all she is "Grandma"!
Is this why they are named Pinchers!?!    ;)