Montana was a thrill to show in his colours of blue
which were never enhanced nor covered while changing from the
taupe colouring to blue during his colour change.

Montana is our first Home Bred Canadian Champion finishing as a
Puppy Champion! 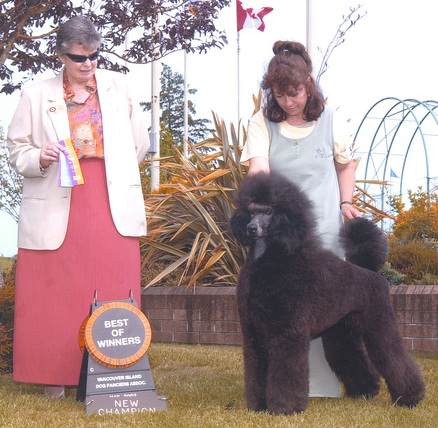 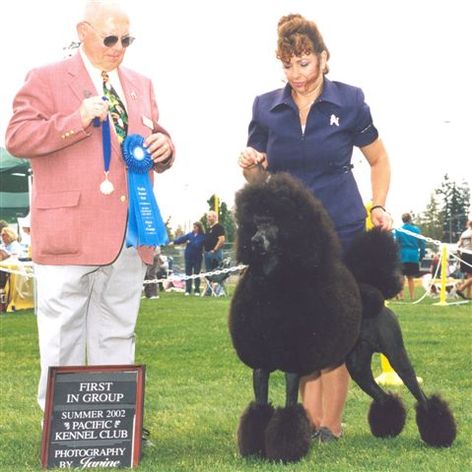 I now believe that all great things come to those that wait.
Not only was he fun and a joy to be around, he was a Great Show Dog especially
the day we got his Group 1st!!

One of the most important roles in his life while he still lived with me
was with my niece and nephew, Tatania and Devon.
His gentleness and affection conquered two shy children who had never been around dogs other than my Standard Poodles.  Montana brought out something in those two children we had never seen before.
Montana is a very special dog and is greatly loved by us all and now by
​Kristin and Owen!
Congratulations!!!

Obedience Handler and Owner of Montana 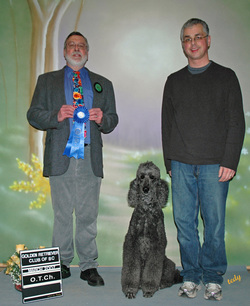 ​Congratulations to
Owen and Montana on their huge success in Obedience.

Montana went to live with
Owen and Kristin where they took him to high levels of
Obedience Trial Champion Excellence!!!!

* Obedience (an overview) By Laura Flaman
An excellent description of all the exercises of each level of Obedience!!!
* AKC Titles and Abbreviations

Montana in his older years 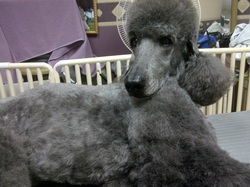 To view more click on
Montana for his
Smelly Hedgehog site!!! 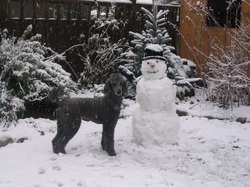 Before Kristin and her Standard Poodle Montana enter a patient’s room at Cottage Hospice where they volunteer as a therapy dog team, Kristin asks the patient if they’d like a visit. “Often people who profess to not being dog people still end up chatting to us and enjoying Montana,” she says. The duo sometimes breaks the ice with the song You Are My Sunshine that Kristin plays on the harmonica while Montana howls along in song. “It’s quite a spectacle. It’s a good release for people.”..................................to read more click below link!
♥   ♥   ♥ 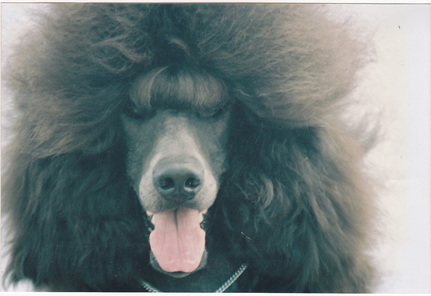 Dear sweet Montana on the road at a show on Vancouver Island, B.C. 2002