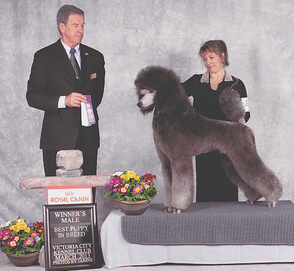 Cruise took two Reserve Winners Dog this weekend with one day of him going Winners Dog and Best Puppy in Breed for a single point
on the Saturday under Judge Mr.Ole Neilsen from Ontario, Canada.

This leaves Cruise on 9 points needing one single to complete his
Canadian Championship title. 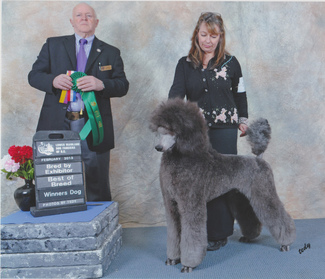 This puts him on 8 points towards the required 10 points for his
Canadian Championship Title.

Our second weekend out 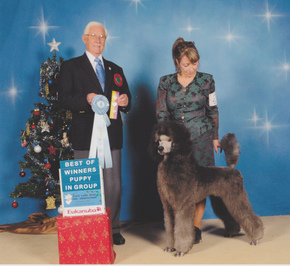 Sunday Cruise and I showed very well under Judge Mr.Charles Trotter from California, U.S.A.
As a junior puppy Cruise took Winners Dog then Best of Winners over the females giving him
three  points towards the ten points required.  He should now be on six points towards his Canadian Championship just needing four points to finish.

The very best part of this was we were pulled up alongside an
American Canadian Champion for consideration for BEST OF BREED!!!
I was very very pleased with the consideration alone!!!
Cruise and I went back in the ring to compete against two puppy Specials (already finished Canadian Champions) for Best Puppy in Breed over six other puppies in total  :)

We then competed in the Non-Sporting Puppy Group and got BEST PUPPY IN GROUP!!!!
I am very happy with Cruise!!!  The first two days he acted ... like a puppy LOL!

We later went on to compete for Best Puppy in Show however we did not have Mr.Charles Trotter for our Judge.
Mr.Charles Trotter comments were how he was a very lovely puppy and LOVED his feet and of course the rest of him.
He especially loved his face and expression!!!

Cruise at  his  first   Dog Show

Cruise competed this past weekend for his Puppy Debut and picked up
Winners Male for one point under Judge Mrs.Geraldine Taylor from Manitoba and then on
Sunday under Judge Mr. Luiz Fernando Ribas Silva from Brazil he took Winners Male, Best of Winners for two points,
Best Puppy in Breed and competing in the
Non Sporting Puppy Group he was chosen for the BEST PUPPY IN GROUP!!!

It was a real treat for our first weekend out to get the opportunity to play in the Best in Puppy Show ring!!

Cruise has always known his crate as to where he eats all his meals including
some meals in a crate in my van just to step it up some.
He is of show and pet quality.
His crate is where he also sleeps at night and as he is still a puppy he has a good nap after all his meals
including a good quiet time before meals as all dogs should.

He is very good and easy on the leash and in traffic.
Cruise is also a star at the hospital where he has visited my father!
♥