Dexter is retired from
the show ring now living  in WA with his humans and their Whippets.

A day out in the woods hunting for gold with his human dad. 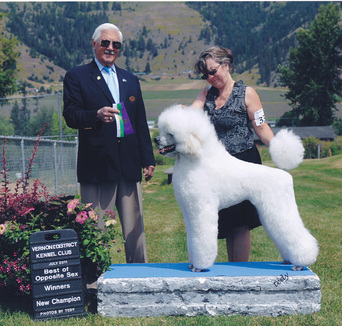 July 10th, 2011
Vernon & District Kennel Club,
Vernon, B.C.
Our last day of Conformations Shows for Dexter!  He took Winners Male for his last point putting him onto the required 10 points
for his
Canadian Championship Title! 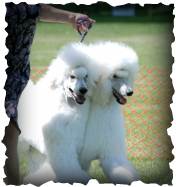 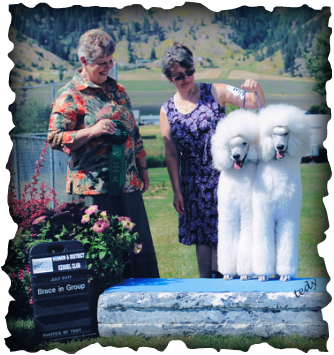 The fun we had
not to mention the fun the Judges and Ring Stewards
were having along with the people around at ringside!!!

A comment heard was:
She is so brave!!!
LOL

We went on to compete against a Brace of Black Russian Terriers only for us to get . . . 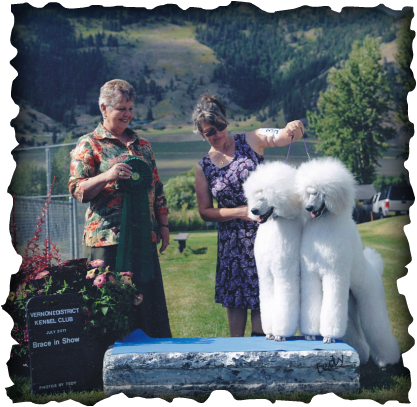 Dexter is immediately beside me with Seger-Violet Sky Night Moves beside him. 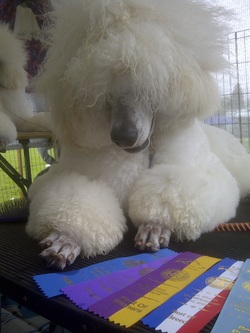 ​July 8th, 2011
Vernon, B.C.
A day in the rain ... the pouring rain, Dexter with me at the end of the lead take Winners Dog, Best of Winners,
Best of Breed and Best Puppy in Breed for a 2 point win under
Judge Diane Ivey putting him onto a total of 9 points towards his Title.
Hmm.....no, we were not following the Judge to this show but we were very glad we did the trip despite the rain and the fact that Dexter had self pruned his ear hair LOL!!!

Winning Ribbons are, First in Class (blue), Winners Dog (purple), Best of Winners (purple & gold), Best of Breed (blue,white & red) and Best Puppy in Breed (light blue).
​
We continued showing in the pouring rain for the Non-Sporting Group with no success but we did have some good fun and laughter in the rain no matter what!

No, there was no singing in the rain! 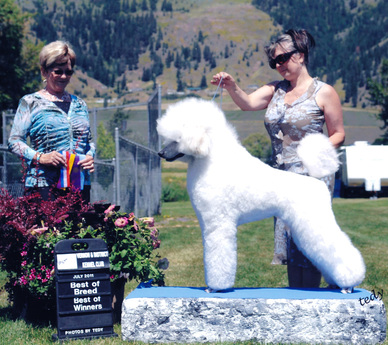 Judge Diane Ivey, Vernon, B.C. We waited for the sun to retake our rained out photo! Hmm wished someone would have told me to remove the shades! LOL 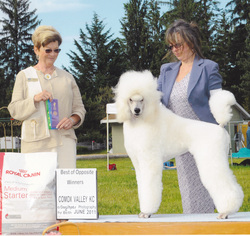 Thank you to Judge Diane Ivey, Vernon, B.C.
Black Creek, B.C.
June 11, 2011
Dexter goes Winners Male under
Judge Diane Ivey
for a 2 point win today putting him on a total of 7 points towards his
Canadian Championship.
A special thank you to Catherine Talbot for your help with the two brothers Dexter and Seger!!!


Pacific Playground Resort and Marina
​is a very nice venue for a dog show
despite the very rough rings with dips and valleys!  LOL 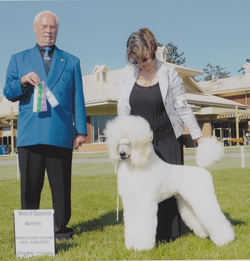 Judge Walter Pinsker, Surrey, B.C.
May 28, 2011
Saanich, B.C.
Thankfully we finally had some competition this weekend other than
my two boys.

Dexter did good on the Saturday
taking Winners Male under Judge Walter Pinsker for the
CKC required 2 point win now putting him onto 5 points.

This show is usually a good one sometimes with wind and rain but I like the venue here where they hold the Saanich Fair.

Another special thank you to Lorianne Amadeo for your help with the boys this weekend, in and out of the ring!
It was good setting up van camp beside you LOL! 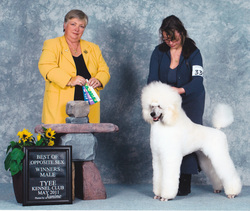 
Friday May 13, 2011
Dexter goes Winners Male and Best Opposite Sex under
Judge Mrs.Jacqueline Rusby from St.Bruno, Quebec for 1 point against his own brother Seger as there has just not been any competition so I had to make my own competition with the two littermate brothers!

Mrs.Jacqueline Rusby is a former breeder of Toy, Miniature and Standard Poodles.  Unfortunately, I missed getting a show picture of Mrs.Rusby.

A special thank you to Cheyenne Deptuch, Laurel Deptuch, Teresa Brereton and
Cheryl LaValle for all your much appreciated help with my boys at
ringside and in the ring!
I could not have done it without you all. 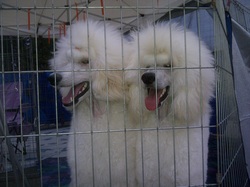 Seger on the left and Dexter.
I just had to include this photo of the two boys having fun!  I have a 10' x 15' awning for the shows which I line up alongside my (ex 15 passenger ) extended Poodle Van.  Even though it was raining they can have a good romp there or inside my big van!!! 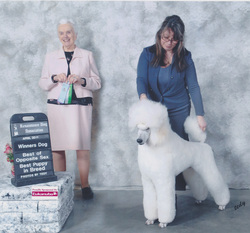 Judge Dorthy Welsh, Wisconsin, U.S.A.
April 9th, 2011
Heritage Park, Chilliwack, B.C.
Dexter is placed for Winners Male,
Best of Opposite Sex and
Best Puppy in Breed
for his first point!
I am very pleased as this is a very honourable win under
Judge Mrs.Dorothy Welsh of Neillsville, Wisconsin, U.S.A.!!!