​I am most pleased of how well Kareem performed despite his mother being in standing heat!  His brains held it together with little distractions. :)

Passed on both Trial #3 and Trial #4 now needing
one more Q for the Rally Advanced Title!

​What a hot day!  It was 30 c.  Kareem and I camped out under the trees where it was a bit cooler than under the tents.  Unfortunately I missed asking for a photo with our judge Margaret Chandler.
♥ ♥ ♥
Sporting Dog Spectacular
​Golden Retriever Club of British Columbia
Hazelmere RV Park, Surrey
​Saturday July 20, 2019
Judge Barb Lowden

For the second Trial of the day Trial #2 I moved Kareem up to Advanced A.
Again we have only had very minimal training as when a show is close by if fully trained or not we are going for it.  Sooo I forgot to reintroduce him to the jump which he had done as a youngster in Trick Dog training then at the June .... so we NQ'd.  Ok then some more work tonight!  ;)
​♥ 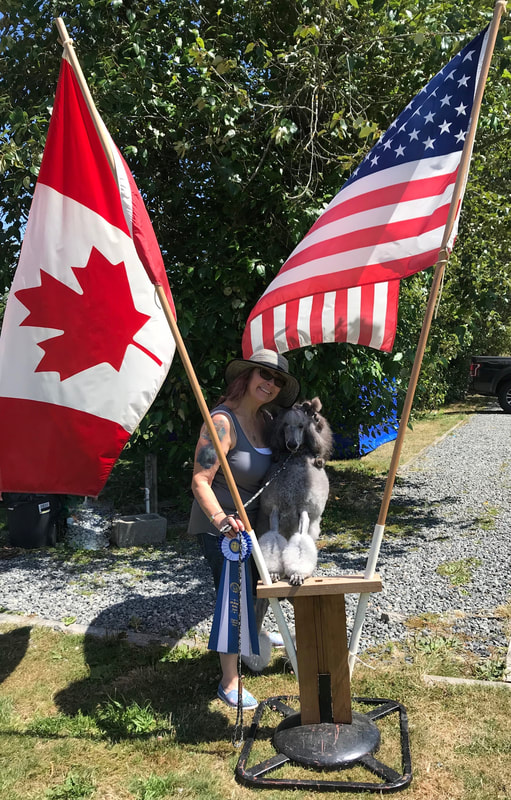 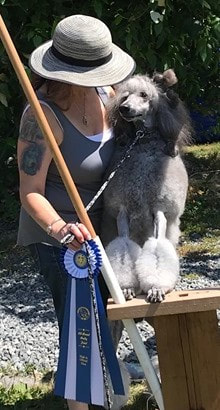 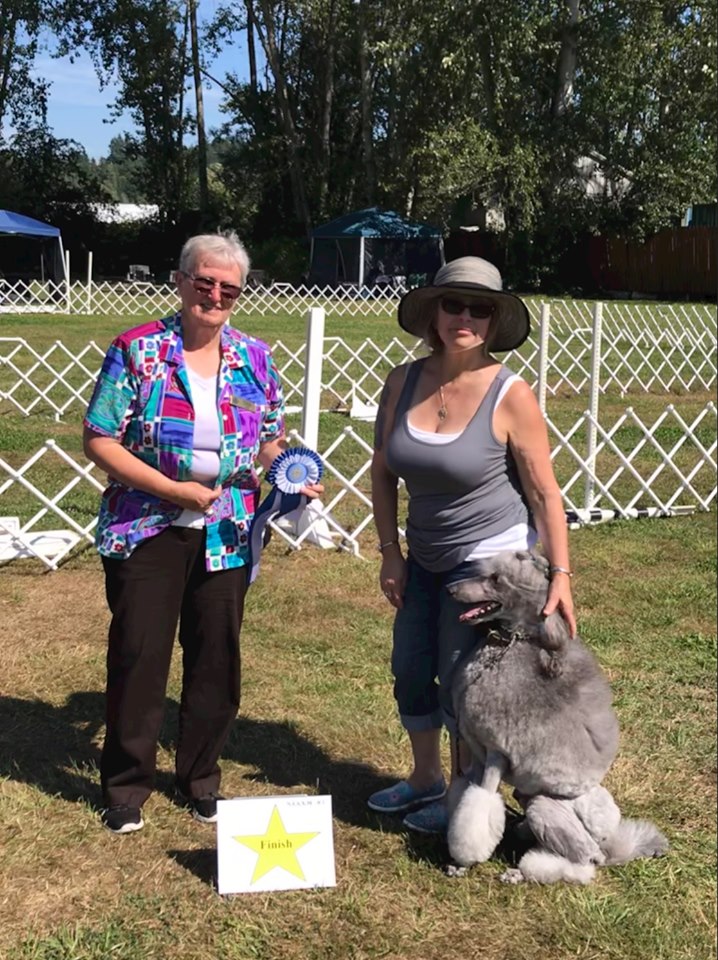 Now what I do NOT want to admit was that for some crazy reason I thought I had just completed my third Qualifying Score towards my Intermediate Title which I had NOT!  I moved Kareem up to Advanced which was his first time off leash
​with only a quick practice the night before and a couple tries at the jumps.
​I was most pleased he did quite well at the jump and off leash however we still needed to train what we didn't do from the last Trial!  Opps!!!
​ So yes we got an NQ.
♥ ♥ ♥ ​​ 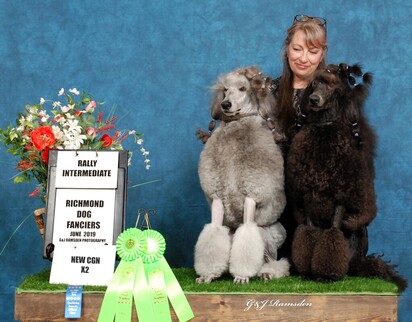 ​Kareem completed the course with a score of 87 for his 2nd Q towards his
Rally Intermediate Title.
We had a few Out Of Positions as I have been busy for every weekend and not been training as I should have BUT what I did do was attend
some great courses by Nelson Hodges!!!  Lost Dog Recovery Seminar in Maple Valley, Washington then to Vernon,B.C. for his Relationship Based Behaviour Modification. Not to be missed!!!  So I have a great excuse!  ;)
​
♥ ♥ ♥ ♥ ♥ ♥ ♥
​Dumbbell Obedience Club
George Preston Center, Langley, B.C.
CKC Rally Novice A & Intermediate
​April 27 & 28th, 2019
The day the Trial entries were closing, I decided I should put Kareem on a leash and see exactly what he knew and didn't know regarding obedience.
Hmmmm better put more training into him however since it is a local Club and
the Trials are close to home I thought just do it! ​
♥ ♥ ♥ ​
Trial #4
Sunday April 28, 2019
CKC Rally Intermediate
Judge Shirley Hubenig

​I moved Kareem up to Intermediate for the last Trial of the day.
I do need to work on my boy to ready him properly for a Trial.  We did get his
1st Q towards his Intermediate Title with a ​score of 86 however he was somewhat distracted after a dog had gone off on him as that particular dog I was told is quite reactive.  Something we must also prepare our dogs for while
​ Trialing or anything.  Train train train!
♥ ♥ ♥ ​​ 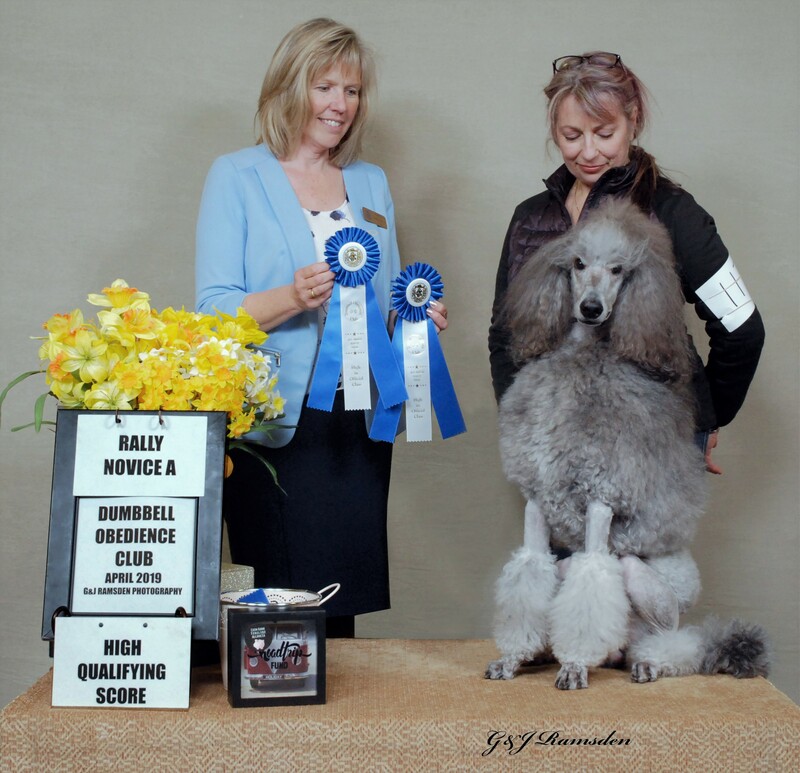 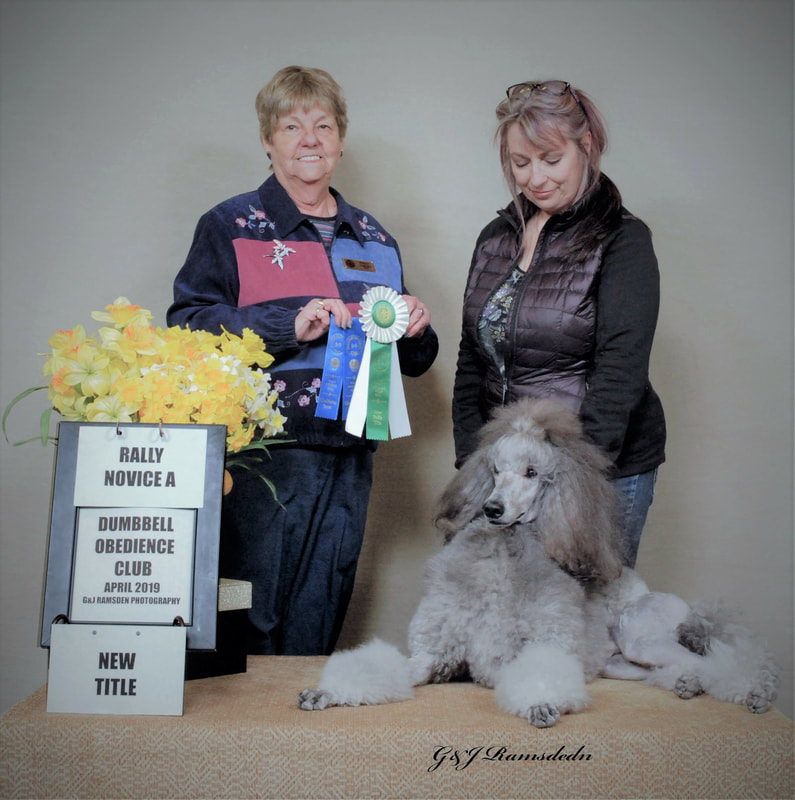 Kareem completed his second Rally course with a 91 out of 100
​ also giving him a HIC! This was his 2nd Q towards his CKC Rally Novice Title!

One must be very careful not to bop their partner in the nose!
Unfortunately this happened on our Call Front 1,2,3 Steps Backward making
​ him not really wanting to be in that position again.  Can't blame the guy!
So sorry buddy!
♥ ♥ ♥ ​​
Trial #1
​ (video above)
Saturday April 27, 2019
Judge Karen Brearley

Kareem completed the course with a 94 out of 100 which gave him a HIC
High in Class! This was his 1st Q towards his CKC Rally Novice Title!

​Not too bad considering we have not done any training since he was just over a year old (now 3 months shy of 3 years old) when we did the three levels of
Trick Dog with DMWYD which I strongly encourage all my puppy people
to get Kyra Sundances book 101 Dog Tricks!
This gave him just enough of a baseline ....
♥ ♥ ♥