PACINO
My client puppy Pacino I get to have fun playing with ... oops to show!!!
This little apricot boy has come into my home and heart and I am finding him very endearing!
He really is a cool little dude with a great laid back temperament!

Thank you to Pacino's Owner Pamela of Celebrity Red Standards and
his Breeder/Owner Annette of Rebelstar Kennels
for this wonderful opportunity for me to show this lovely boy!
♥
Pacinos Pedigree
Pacinos OFA Health Tests
​
Click photos to enlarge 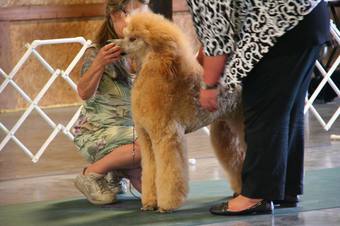 Pacino with myself at Mt Vernon, WA
​Auld Lang Syne Show Association
Chilliwack, B.C
June 5, 6, 7 & 8th, 2015
He is now a Canadian Champion and a Multiple Best Puppy in Group Winner.
💕 MBPIG CAN.CH.REBELSTAR WHERE THERE 'S SMOKE THERE IS FIRE 💕
💕
*A little fun thing happened this weekend ... Al Pacino himself was awarded the Key to the City of Montreal, Canada* 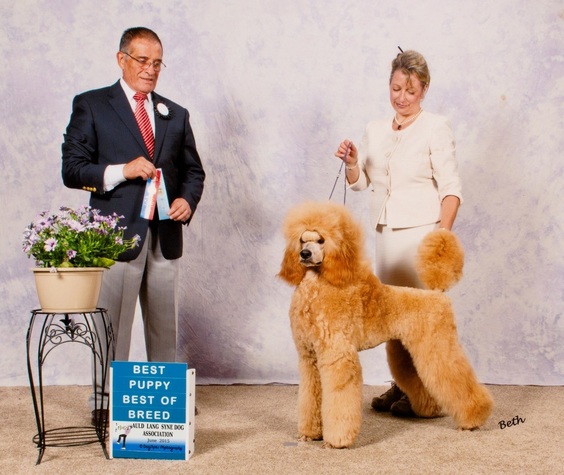 Judge Mr.Oscar Valverde Calvo of Costa Rica
Pacino's owner joined us Monday June 8th, 2015 to watch Pacino for his last show day in Canada being shown as a Special.
Unfortunately one of the competitors pulled his Standard Poodle making it not worth it for the other one to show theirs going up against
a Special which I fully understood on their behalf!   That particular person does not surprise me one bit.  A shame as my owner came up to watch the other Standard Poodles as well as her boy which is all part of the showing.

Below are some snapshots taken by Pacino's owners showing in both the Non-Sporting Group and
the Non-Sporting Puppy Group under Judge Mr.Oscar Valverde Calvo from Costa Rica.
💕 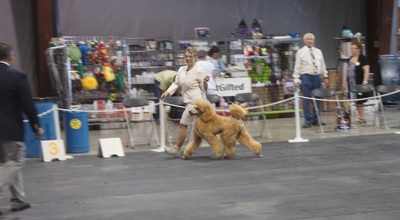 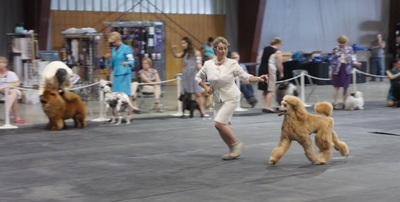 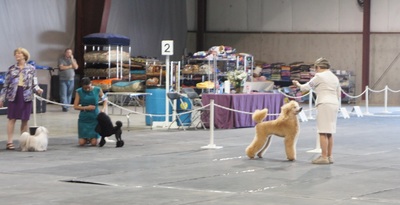 Auld Lang Syne Dog Show
Sunday June 7th, 2015 we showed again for our security points which we were advised to do by another handler.
When we are only able to confirm 4 points from the Renaissance Dog Show the beginning of April
with CKC, it just isn't advisable to take that chance!
Pacino goes Winners Dog, Best of Winners, Best of Breed and Best Puppy in Breed under Judge Anne Katona
for 2 more points making it safe now to move him up to a Special! 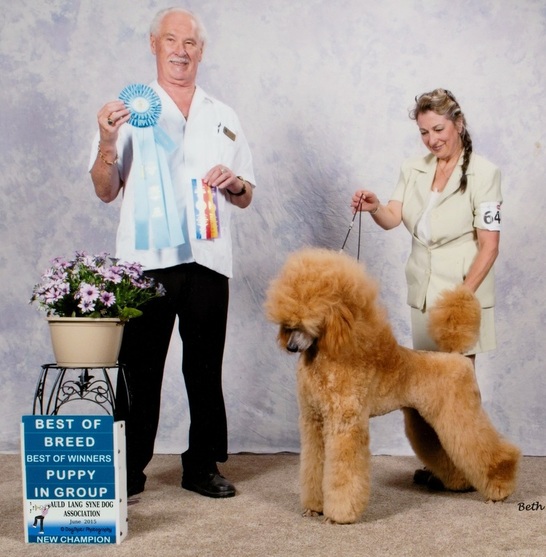 Auld Lang Syne Dog Show
We were the only male so no points for Winners Dog Friday June 5th under Judge Carmen Haller giving the
Bitch the one point for Best of Winners.
♥  ♥  ♥
💕  Pacino adores hanging out with his best pal Santos in my home!!! 💕
Pretty adorable I think!!!
(click onto photos) 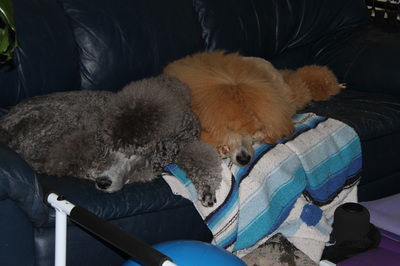 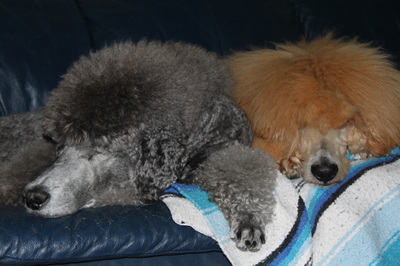 Our third show weekend out Pacino and I were accompanied by his owner
Pamela and my two senior Standard Poodles, Shiraz and Santos!

Off we went to catch one of the B.C.Ferries over to Vancouver Island.  With a one hour wait we were on the 1:00 pm Ferrie.
From there we drove right over to the Quality Inn Waddling Dog in Saanich to check in.
We were very happy to see "John V" the resident Basset Hound behind the desk!  A very dog friendly Inn!!
Also an extra big thank you for the dark haired lady at the front desk in the evenings!!!

After setting up the crates and getting settled in our quaint room, off to the show site we went to
set up my 10' x 15' canopy tent, expens and grooming tables at our pre-reserved spot.
Once done we enjoyed a salad for our dinner before returning back to the Inn for the night.

We were hoping for a nice yummy seafood dinner out tonight but it was not meant to be!  LOL  As we went to start the van,
it said nope not happening!! We were so busy with the two shows today and then getting ready for Best Puppy in Show we forgot to
unplug the cooler from the van and plug in to the power provided!!  I can pretty much leave my fantastic fan running in the van all day
so subconsciously did not really think about the cooler too much ... apparently!!!

Thank you to the gal in the food truck next to us for the jump start AND thankfully I do carry jumper cables!  So much for the
hopeful seafood dinner at a fancy restaurant!  We did however have a very enjoyable yummy dinner in the Pub at the Waddling Dog which
we finally got to around 9:00!!!  We very much enjoyed the Spinach Salad and Cajun Prawns along with good friendly service! 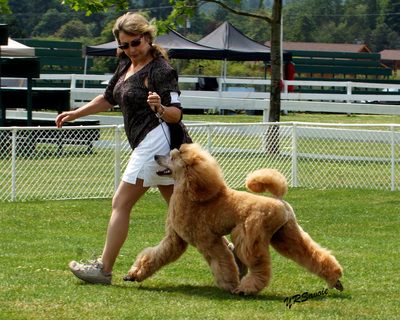 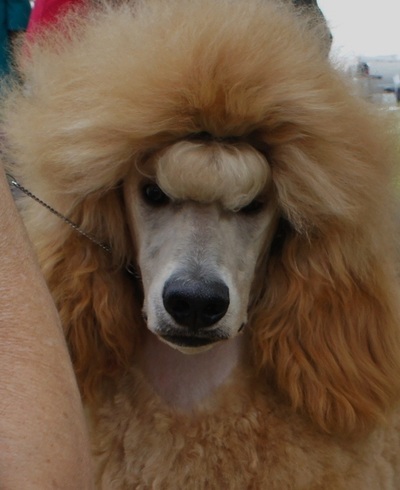 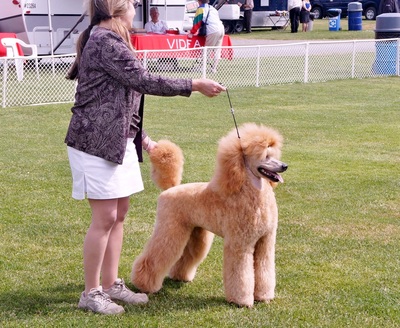 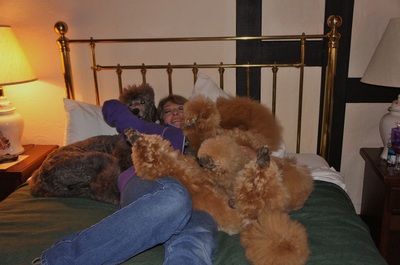 (click onto photos)
... continuing on Saturday and Sunday May 23 & 24th, 2015 at VIDFA
Judges Mary White & Barbara Watt
We di﻿d not place these two days however each dog competing did place with the
exception of Pacino taking all the points for the 2 shows on Friday.  ;)

Saturday after the ﻿dogs were tended to (which of course happens :) all day) Pamela and I with dogs in tow
set off for the Zanzibar Restaurant which was pretty much one mile down the road!!!
We parked in the shade with the van wide open creating a nice breeze through keeping the dogs most comfortable.   I only go to Restaurants where we can watch them the whole time!  Most satisfying for us humans too!!  :)

Starting off with the Tapenade we were pleasantly surprised how delicious it was wanting more!!
Next for the Warm Pear Salad with Candied Pecans & Roasted Beets, Cambozola Cheese which again we were very impressed only
to continue being impressed and most happy with our choices of Grilled Tiger Prawns with Garlic Butter & Sambuca!
Our second dish which we shared as well was Pan Fried Scallop Pappardelle which was a homemade Red Pepper Pasta,
Bacon, Nori, Arugula and Ginger Liqueur Cream Sauce.  We had absolutely no need for dessert!!!
We were in food heaven!!  Great service with a very lovely atmosphere!!

Sunday we were in luck once we finished showing and tearing down our set up to be able to
drive right onto the Ferrie without a moments wait!!!
All in all we had a fabulous weekend picking up the 4 points on Friday and a Best Puppy in Group!
Both Owner and Handler were very happy and pleased!!!
♥  ♥  ♥
Renaissance Dog Association
Chilliwack, B.C.
April 3, 4, 5 & 6th, 2015
Easter Monday April 6th
Pacino was awarded Winners Dog, Best of Winners for another 2 points putting him on 4 points now,
Best Opposite Sex and Best Puppy in Breed over a Canadian Champion Special from the Junior Puppy Class.

Thank you Judge Hassi Assenmacher-Feyel from Essen, Germany for judging this worthy dog appreciating his colour as well!
Another Judge that really went over the dogs along with having two dogs moving side by side on the
down and back to really watch for correct sound movement  :)
♥ 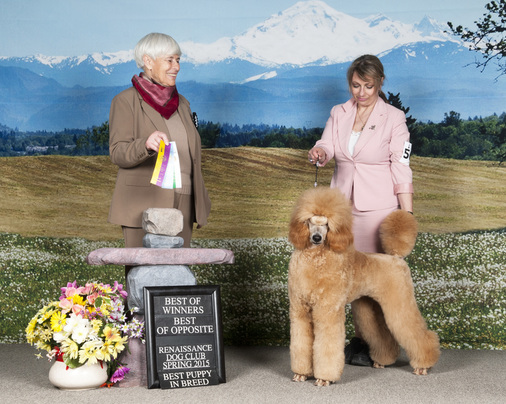 Judge Hassi Assenmacher-Feyel from Essen, Germany
A special thank you to ladies
Janine, Susan, Libby, Lisa & Debbie of Photos by Janine, Tsawwassen, B.C. ♥
♥
Easter Sunday April 5th, 2015
Pacino was awarded Winners Dog and Best of Winners for his first 2 points which is a required win towards
his Canadian Championship Title.

Thank you Judge Mr.Luis Miquel Pinto Teixeira from Lisboa, Portugal for judging this boy and appreciating his beautiful colour!
This Judge really went over the dogs along with measuring the ear length which yes is in the requirements along with having
us move around the ring more than once watching for correct sound movement  :) 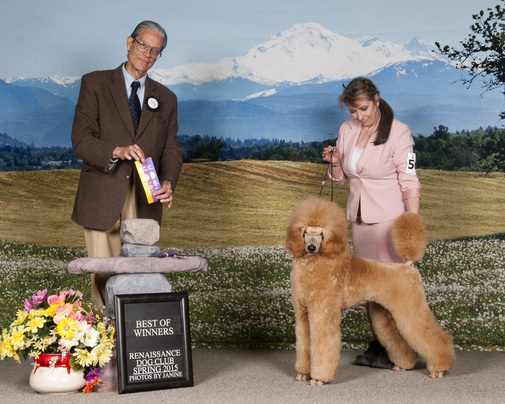 PACINO'S PUPPY DEBUT
Pacino's first dog show weekend, shown as a junior puppy at eight and a half month old.
I was pleased how calm and cool he was never putting a foot wrong ... well with a call name like Pacino ...!   ;)
We did not place at his first show however it was nice to be pulled out behind the Reserve Winners Dog and in front of
another dog our second day showing under Dr.Tomas Jakkel from Budapest, Hungary.

Look here to see Pacino and some other dogs from the Oceanside Dog Show taken by the
CTV News cameraman click here!
♥  ♥  ♥
(click onto the photos below!!!) 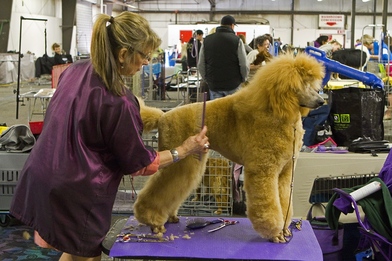 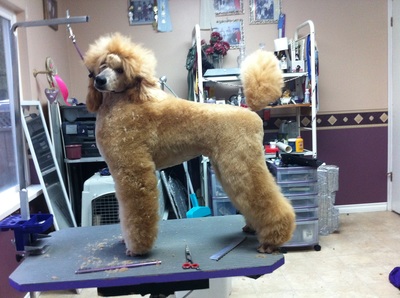 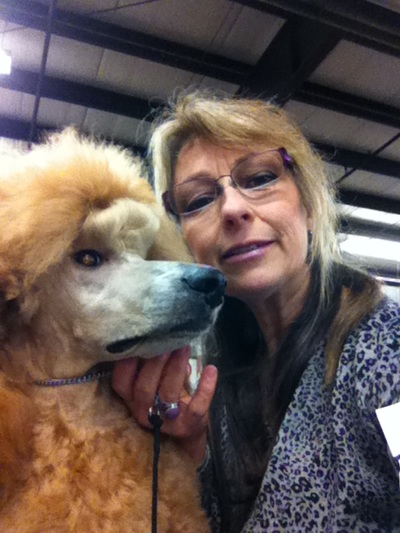 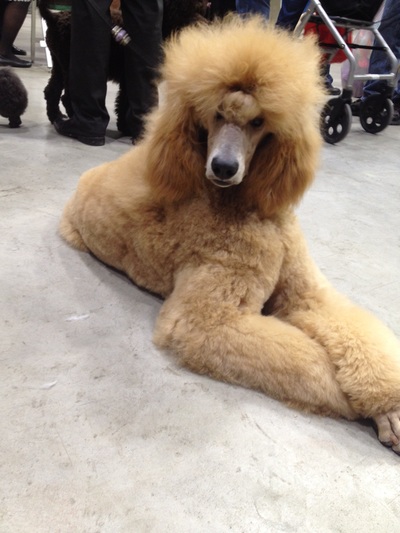